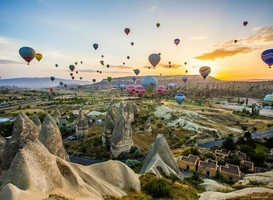 Cappadocia is such a place that is the most popular tourist center of Turkey and the world’s most rare natural beauty.

Cappadocia is a region that covers 20km in Nevsehir Province. The most significant regions of Cappadocia are Urgup, Goreme, and Avanos.

The general features of Cappadocia are;

How did it happen?

It is thought that fairy chimneys and the Cappadocia region were made by the ashes that blanked by the mountains Erciyes, Hasandagı and Gulludag approximately 60 million years ago. This unique and beautiful soft layer has been shaped over the years with the help of wind and rain.

The Cappadocia region is an inseparable beauty of nature. While geography creates fairy chimneys, humans build houses and churches as well as monasteries. In addition, Cappadocia has the stamps of billions of civilizations. The written history starts with Hittites in the paleolithic era. Cappadocia is the most important crossroad of the Silk Road for commercial colonies.

Cappadocia is a very important tourism region where many sports