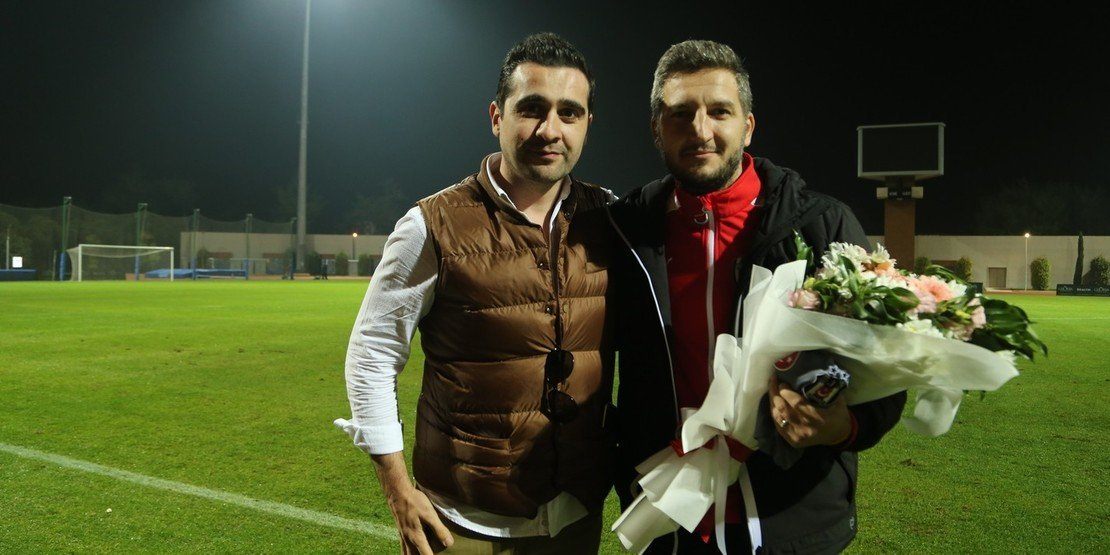 What is camping, why is it important? The key to success in sports is working. The most important reason for every success is to work and always work harder.

The camps organized before and during the season have a key role in determining the road map for success, the healthy condition storage of players, physical strength, mental regeneration, planning (game philosophy, defensive and offensive strategies), tactics and team alignment, the determination of deficiencies in the team, and so on. Preparation of football teams for camps and organizations takes place pre-season, tournament period and in between seasons.

The preparatory work of the tournament period is obligatory in different cities in accordance with each match schedule depending on the schedule of the organization. However, pre-season and in between seasons camping and preparation studies may differ depending on the match calendar of each country Federation (pre-season camping athletes physical, technical, tactical, theoretical and mentally prepared for competitions is the process. Duration of the preparation period, team games 2-3 months, athletics in some branches may take up to 5-6 months.

Pre-season camping activities usually take place in cool, high-altitude Highlands between July and September. As an example of such places in our country there are Abant, Gerede, Kartalkaya, Davraz, Kızılcahamam, Ilgaz, Palandöken, Afyon. The common point of all these regions is that they have cool air, suitable humidity, temperature and oxygen conditions during the summer period. In the winter season, the first half of the league starts with the end of the season, because of the intercity camping work is in the winter season, the appropriate humidity and temperature, rain and wind effect will be selected as the minimum places.

Local and foreign clubs in this period, especially in the Mediterranean, Antalya, Belek, Manavgat as a camp site, rarely, the Aegean as a working area center. During the period of December-January for the teams of our country inter-circuit camps, foreign clubs according to the suitability of this period can extend until March. (Eastern Europe, Russian and Scandinavian teams). In this essay, enriched with academic excerpts, we will focus more on pre-season camping work. It is very important that the teams start completely in the camps before the season and that the team's chemistry is formed.

It is vital that the new transfers to be made take place before the start of the camp. Joining the team in a short period of time with the current players, team, adopt a tactical understanding of the performance of the season is vital.

THERE ARE CLUBS CARRYING OUT THE CAMP WITH SPONSORS

Football clubs ' camp staff football players, technical committees, managers, health team, outfitter, masseur and other staff may vary from 30 to 50 persons. In very extra cases (the camps in which they take part in big tournaments), the club also makes this staff even more crowded by thinking about the fans who will come to support. This situation can often be seen in teams from abroad in the camps organized in tourist centers rather than in the camp before the season. The members of the press who follow the camp should not be ignored in this regard.

In the more prominent teams, the number of national and international media members following the camp is increasing. There are clubs that perform their pre-season camping with the support of the sponsors. On the one hand, the teams are intended to see the deficiencies with the preparation matches, while on the other hand, these tournaments generate significant income. The number of clubs that choose the way of generating income through broadcasting and reward during the camp period, organized by the organizers and sponsors, is also immeasurable.

In this way, camp costs are reduced and income is provided to the club. Tournament and special matches are an important factor in the selection of campsite and program of football teams. Both direct income and camp costs are covered.

There are factors such as availability of quality accommodation facilities, ease of transportation facilities, excess number of training and matches, availability of match and tournament organization, clean air - oxygen ratio, humidity rate, climate and location, precipitation rate, wind, temperature, altitude (elevation above sea level), climatic factors. These benefits should be briefly mentioned. The quality of the facilities is very important in the location where the preparatory camp has been decided to be organized.

Facilities should have the necessary equipment to enable the sportsmen to participate in accommodation and social activities of the football players in terms of physical, fitness and morale social opportunities have an important impact. After intensive and heavy work, accommodation facilities that include relaxation, social environment, eating-drinking, having fun, sauna and Turkish bath, games are considered to be one of the most important support factors of the ideal campsite.

The general difficulty with football teams camping hotels is that they do not want to be in the same facility with other teams as much as possible, especially because more than one team is staying in the same facility, and in climate conditions, football teams are very important element in the selection of camp sites. It is observed that cooler regions are preferred in pre-season studies.

High-altitude, low-humidity locations that do not take up too much wind, have high oxygen levels and can be used to gain power are considered ideal camp sites (On the other hand, the most important factor in the camping and preparatory work in the winter period is predicted as mild weather and low humidity, especially excessive rain and wind are done in the time of the negative twin. It is useful in two ways, such as adapting to altitude and improving performance in low altitude places, between the height and the pre-season camps.

Many studies have shown that some blood parameter values increase at high altitude. However, as it increases the oxygen in the air is decreasing, although the rate of this event is called oxygen starvation, causing the situation to strengthen the work of the respiratory organs, and causes more intensive high-altitude camps in places to be refreshed and cleaned of human blood, increases endurance capacity of athletes blood values positively regulate to protect the environment and prepares the gains obtained in this way for a long time. For this reason, athletes or coaches and managers prefer to do their work in high places before the season.

Strong winds adversely affect the freedom of training. A camp center, which receives constant winds, is a preferred center for the camps before and after the season, where training is vital. If the negative effect of the wind blowing from time to time is left aside, a continuous airflow prevents the temperature from rising further in summer months, and this allows camping in cooler environments. Only climate and accommodation factors are not sufficient in choosing the camp center.

In addition to the ground and grass quality, lighting system, drainage system, support services, close proximity of the facility to the football field is another factor in ensuring safety on the field.

Besides the ground and turf quality, the lighting system, drainage system, support services, the proximity of the plant to the field of training can be secured on site and offsite. It is necessary to find that the athletes are able to meet their eating and drinking needs with menus made from organic foods, which are made up of calorie accounts.

TARGETS FOR THE DEVELOPMENT OF CAMP SPORTSMEN

Although there is a lot to write about the content of the camp, the part to be written is very limited. We believe that sufficient expertise is needed to comment on the content of the camps and their methods of work. Nevertheless, it’s a good idea to log in to the subject by making a few quotes here. General preparation period is evaluated in two phases. The general preparation period aims to improve the working capacity of the athlete, regardless of the characteristics of the sport branch.

The higher the working capacity of the athlete, the more adaptable the physical and psychological effects of training. So the stronger the working phase, the higher the level of skill to be achieved. In this phase, the goal is to strengthen the weakest aspects of the athlete in the physical field. This period, called Phase 1, is very valuable for the athlete. In this period, the athletes provide their own infrastructure, the condition stores in the season will receive a lot of rewards. In short, the first phase of the preparatory period is extremely important in terms of being ready for the second phase. In the second phase, the Athlete's compliance to training and competition is ensured at this stage.

TEAMS CAN ENTER THE LEAGUE BADLY

General conditions are developped according to the purpose and characteristics of the sport branch, it is strengthened and it is aimed to reach a high form state. Most of the motoric features such as overall durability, maximal force, speed are developed in this phase. Technical corrective work is applied only in general sense. The studies take place step by step from General to special principle. After the condition infrastructure is provided, more loads are started in the second phase. (Not 100 push-ups once, 2 times like 50 push-ups)

Excessive loading or slight loading in the camps before the season can cause problems during the season.

We often see many examples of this in our League.

The simplest and understandable example is that the league is a club that does not get a win for a long time after logging in like a fissure, and the league is in a club that opens up like an arab horse after a bad entrance. As a result of the performance measurement evaluations made on the dosage of the loads to be made to the players, the technical team decides. At first, this is exactly where we call our expertise outside. For this reason, there is not much information we can write about this section, and even if we do, it is obvious that the information we will give will not be healthy. At this point it will be the most logical way to leave the job to the masters and to trust their experience.

THE NUMBER OF CAMP CENTERS SHOULD INCREASE

Many teams in our league have recently performed their pre-season trials in two stages, taking into account the time they spent in their own premises. First of all, our teams prefer pre-season camping centers in our country (Antalya, Abant, Gerede, Palandöken, Davraz, Kızılcaham etc.).) afterwards, Europe (Austria, Belgium, the Netherlands, Spain, Slovenia, etc.) considering the factors mentioned in the upper lines on the continent. In some cases, it is seen that clubs divide the camp period into two periods.

Teams returning to the country for listening after 10-15 days of Camping can go abroad once again. In this case, differences can be observed. Like the teams who started their domestic camp and then went abroad and then made the finals again at home. Choosing a high quality location is directly linked to the budget of the clubs. Clubs should be careful to make an agreement with the professional sports organiser who can find professional camp sites and strong rival teams in the countries where they will be camping.

This situation is mostly seen in the camps in our country. The reason for this is the lack of alternative camps in the city, as it is not able to respond to intensive demand. With the breakthrough in recent years, Afyon city has been added to the alternative City section. Afyon is now considered a preferred Center for Arab teams. Further increase in this number will have a clear effect on the solution of the problems we are talking about.

It would not be very logical to say that in the last 1-2 years it was an improvement over previous years. It is my greatest wish as a supporter of passing a camping period in which the team is completely blended with the team experience, without any injuries, team alignment is at the line stage.