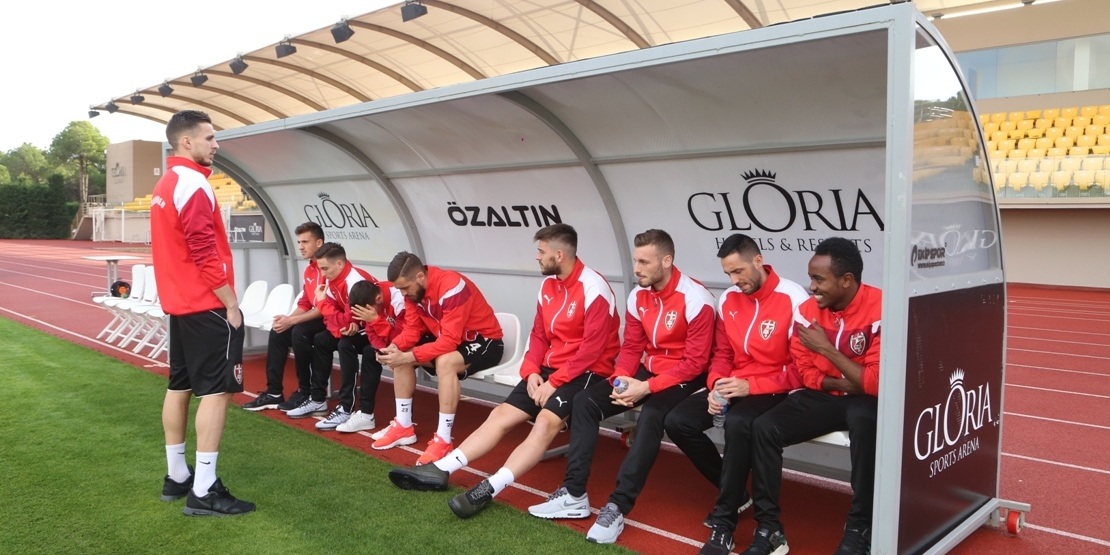 Football was beginning as an exciting game in workers suburbs of England. Transforming of football to international race and countries rivalry is an interesting phenomenon and object that need to be studied.

Not rare football became political force between national teams of one or other countries, friendly games helped to establish bilateral relations between countries, became the first step of reconciliation between nations.

Football national teams became an image of country and football players have the mission to be an example for the whole country.

No one sports type as football hasn’t any such big meaning for development of society and country. But with its positive influence in case of behaving the youth and strength of society, it also has the danger of fanaticism.

Fanaticism is the phenomenon that inherent not only in football or other sports. We can meet it in different spheres of our life: from religion to show-business and culture. The fanatic is the man that has unhealthy wish to urge all word in the ideality of his idol. Because we can say that fanaticism is going near with aggression. When it comes to football, it has no exception.

If football as itself is “gentleman” sports type, but on grandstands and out of football field it became the reason of aggression, hatred and blood shedding. Such behavior of fanatic crowd delivers a lot of inconvenience for the development of football, try to blur the reputation of this sport.

And thus, it contributes to the transformation of healthy rivalry between teams to fights and zones of hard relationship with insults and reproaches. Of course, football is the sector has responsibility for the development for such an unpleasant thing as football fanaticism. Modern football became a huge financial industry with enormous capital, costly players and contracts for billions. Only in 2014 FIFA got income 4.5 billion dollars from World Championship.

From this perspective, such situation became clear.

Researching process of happening and development of such thing as football fanaticism, it became clear that it opens doors to more dangerous things as nationalism and xenophobia. Man role in this play language and informing about matches in media. For example games of big teams with the world, the brand can be shown as a great victory with heroes who fight to the death.

The football match that is distorting and praising a lot becomes a great battle. So the game is losing sports value and became a reason for hooliganism of people, who can’t put up with “great loss or glory”.

Perception of football by football fans became as “stay for your team to the death”. It has come danger that person with such mind can kill if the case turns up. Evidence of these aggressive moods among the fans is steel arms took to tribunes, Molotov cocktails. How often we see that tribunes transferred into smoke, blazing a place of lawlessness and aggression, endangering the lives of those who come to enjoy the game. Unfortunately, such things are not special ones of one or another region, it becomes globally.

For example, on 24th May 1964 in Peru, on the match between Argentine and Peru crowd became furious about losing of Peru team and kill 318 people plus 500 people were wounded.

In 1970 a fight was broke out on the match between Salvador and Honduras that lasted 100 hours. Then it has named “Football war”. As a result of war 2100 people were killed, 10000 wounded. War was stopped by the Organization of American States.

Also on May 29th, 1985, it was fought broke out between fans of Juventus and Liverpool. In result, 39 people were killed.

All sad tragedies listed above are a little part of the sacrifice of football fanaticism on stadiums and streets. Also, the rise of football nationalism made upset. Players, referee, and ordinary fans become the target of fanatics for their nation, religion, and race.

Such tragic fallout of football induces to think every normal man. The first step for preventing of such things is the refusal by media to people which propagandizing football fanaticism, aggression, hatred, xenophobia. The main thing is social education, the building of friendship and solidarity. Upbringing based on love and mutual understanding playing the main role.

The main feature of human that can’t respect, love anybody, forgive is prejudgment. Also with it, here come such negative behaviors as insults, repulsion, hatred, aggression, wildness, psychopathic behavior.

It must be carried out educational activities for football fans. Such valuable and important part of the sport as football must be cleaned from such things as hooliganism and stopped being a source of evil, aggression, hatred. It needs to make effort for the development of fraternal, friendly relations. The footballers themselves can make a big contribution to this. They have a big responsibility to reform the sector. Football should be a unifying and joint force.

Football today is a great industry with its own rules and law. It is always exciting and enjoyable to see the game, filled with contrast and bright game confrontations. Football is something special. Inside of each, there is the passion for an accurate goal kick. Everyone is experiencing an internal movement towards the ball on the street directed to you, everyone was playing "football" with a folded toe, throwing garbage with his foot in the trash ... All this is our inner need for football.

Football matches are filled with such an atmosphere that it seems to every spectator that it is he who is now on the field. Therefore, we shout, get sick; do not notice our behavior, because we are already on the other side of the TV, one on one with the ball.

The desire of such a gentlemanly and pure sport like football, to make an uncontrollable monster, today is a big threat. Human life is an adventure that does not tolerate emptiness. A person living a rich and varied life will never go to crush the stands and kill people. Fanatics and hooligans generally try to fill their voids in life, to become a force through their powerlessness and loneliness. Many of them are driven by resentment, anger, and desire to avenge the failures in life.

The growth of football fanaticism is also promoted by the football industry itself, which is becoming more and more sophisticated every day. Huge turnovers of money for transfers of players, brands, and companies for distilling pushing expensive T-shirts, boots, attributes; advertising, business, fabulous incomes, all this is done at the expense of money from the pockets of poor fans, who find the meaning of life only in merging with this industry.

Such an industry creates suitable and fertile ground for the growth of fanaticism and can be used for the purpose of disintegration and discord of society.

What is the secret of the popularity of football?

You can long search for the secrets of the popularity of football. But maybe, without stopping at all reasons, to say the most important, football is very similar to our normal life. Sometimes the ball is in your goal, and sometimes you score a goal against the opponent. Sometimes you get a red card from life, and sometimes you get a chance to score in the form of an opportunity to score a penalty. To succeed in life, as in football you need to put a lot of effort.

Like football, life will end sometime. But there is no time to think about it, falls, injuries, victories, we rise and run further...