What is volleyball history and rules ? 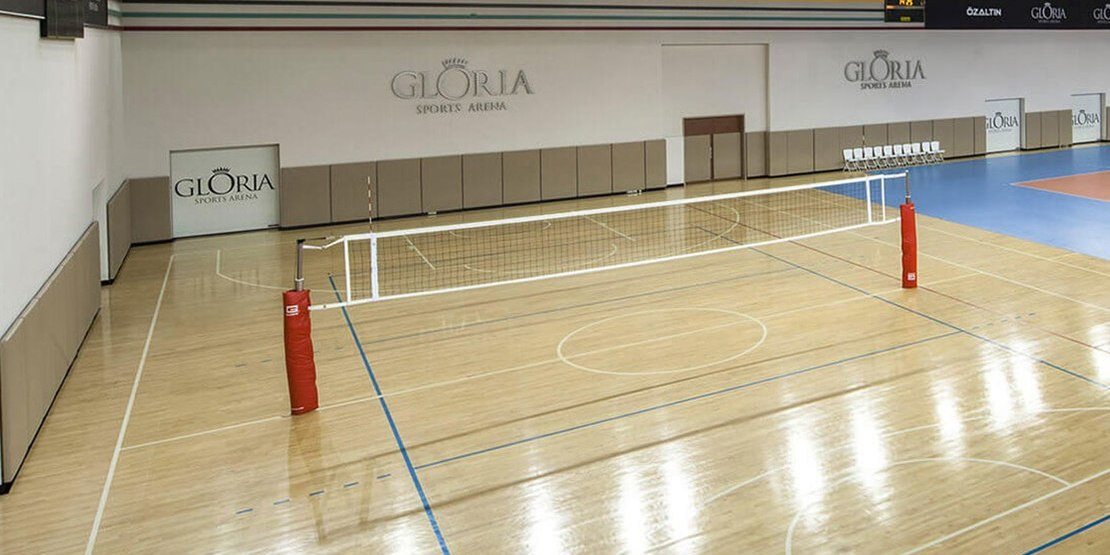 History and Rules of Volleyball

Volleyball is a Sport, where two teams compete on a special site, separated by net.

The aim of the game is to force the ball down over the net on the opposition’s court and prevent the same attempt of the opponent.When teams send the ball to the opposite field, the ball must be reflected at least once on its field. To do this the team has 3 touches of the ball and another possible additional touch of the ball on the block.

The rally is started when one team serves the ball: the player serving the ball sends the ball to the opponent's side. A rally can end by one team hitting a winning shot that hits the ground within the opponent's court or by one team causing a fault and losing the point.
Whoever won the previous rally gets a point (system :every rally – point”). If the opposing team wins a serve, it gets a point and and to serve next. If the referee gives a yellow card to one of the team players, the team receives 1 penalty, and if this team has the right to serve, they lose this right. If the referee gives a red card to the player, he leaves the game.

The players move one position clockwise. Volleyball can be played in the sport hall, on the beach or on the lawn.

The inventor of volleyball is the teacher of physical education William J. Morgan, who worked at the young Christians Association (YMCA) sports club in Massachusetts, USA. On February 9, 1895, he began playing volleyball in the gym. Morgan called the game "mintonette", which was later called volleyball, following the principle of hitting the ball not touching the ground (vole) the game became known under this name. The volleyball rules, first written by Morgan, were supplemented in the end of 1916 by the joint work of the National Sports Association of universities (NCAA) with the YMCA. Volleyball, which played in the US a short time, was brought to Europe by American troops during the II World war. After the sport developed independently in different countries for a long period, the international volleyball Federation (FIVB) was established in Paris in 1947. The first World Cup was played by men in 1949, and by women in 1952. Currently, the FIVB, which center is located in Lausanne, in the center of Switzerland, has more than 140 countries. 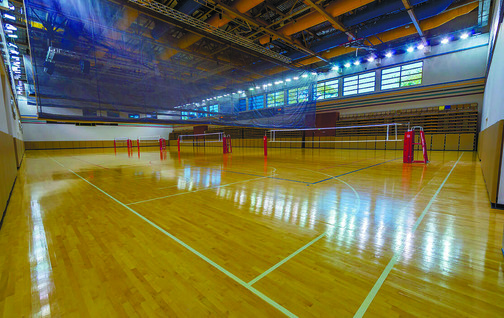 Hitter: the player who comes to the fore of the game at the time when the passer passes the serve and usually attacks with a long pass. He can also be called player number 2. This player does not participate in the 4-2 arrangement.

Diagonal striker: the player number 4, who usually comes with long strokes. This function on the field is performed by two players. When the first player goes to serve, the second player comes to the fore (i.e. cross). Thus, they can constantly attack from zone number 4.

Middle blocker: player under number 3, hits with short-range passes. In this position, 2 players play on the field. When the first player goes to serve, the second player comes to the fore (i.e. cross). Therefore, zone 3 is a permanent offensive zone.


Libero: the 6th player of the team. Dressed in an uniform of a different color (usually completely different from the team color), in contrast to other players there is the letter L next to his name in the players’ name list, indicating that this player can not perform other tasks during this match. He is the defender of the team. Libero can replace any player on the back line.

He is limited to playing as a back-line player and is not allowed to carry out an attacking strike from anywhere (including the playing area and the free zone) if the ball is completely above the top of the net at the moment of touching.

He may not serve, block or attempt to block.

Can attack from the back line, but do not jump. Can jump within 3 meters. Can take the ball with his fingers in the back line. When replaced by two other players, he must obtain the permission of the judge, giving a sign with his eyes, and also be at least in visual contact with the coach. The reason he wears a different color uniform is due to the aesthetic perception of volleyball. Sometimes they can wear the uniform of the opposite team.

The player's uniform consists of a t-shirt, shorts, socks and sports shoes. The players ' t-shirt are numbered from 1 to 18. The captain of the team should have a stripe on his t-shirt, emphasizing the number on his chest. It is forbidden to play in the form without official numbers or color, different from other players (Exception — for the Libero in the color of the form), and/or drawing numbers that do not comply with the rules. Players may wear glasses and lenses at their own risk.

Players who do not participate in the game can warm up without the ball in the free zone behind their playgrounds during warmup, breaks and technical breaks, and between sets with the ball.

Lead serve: the purpose of this serve is to speed up the attacking serve of players number 4 and 2, where the serve is performed in a corner of the field or parallel to the field.

Short serve: a serve that aims to make a quick attack before the opponent takes the place of the defense, directed to players number 3. Depending on the height and time there are 3 types of serve.

Early short: player number 3 moves while the ball is in the air before the ball reaches the striker. 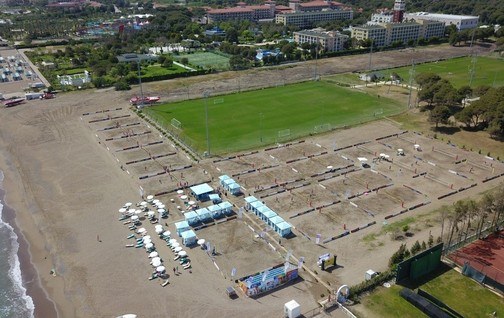 Medium short: player number 3 moves until the ball reaches the striker, and the striker hits the ball at its highest point, jumping up.

Late short: player number 3 hits the ball when it falls down.

The tactics of the game in Volleyball

4-2: this is a tactic of two passers, two hitters and two middle blockers players. Two passers defend the background and are responsible for the serve in the foreground. The fact that the attacking mission is constantly in the hands of two players is a weakness of this tactic.

5-1: This is a tactic with one passer, two hitters and two middle blockers. When the passer moves to the back line, it takes basically the functions of a defender. If the ball reaches the passer, he meets it and the player who made the serve becomes in the position of crosswise to him, otherwise the passer runs away at 3 meters, making the serve and again takes a defensive position. When the passer is on the back line, the attack can involve three players, therefore this tactic is a very strong position.

Modern 4-2: It is a game with two hitters, two passers and two middle blockers. The difference of this arrangement is that the functions of the striker belong to the striker of the back line, and the striker who came to the fore leads the game diagonally and the team can attack the whole game.

The Surface Of The Playing Field:

The surface of the field should be flat, horizontal and uniform. It should not be cause of any risk for injury to players. It is forbidden to play on uneven and slippery surfaces. At the world and official competitions of FIVB it is allowed only a wooden or synthetic surface. Any coverage must be pre-approved by FIVB. In indoor halls the surface of the field should be light. The lines at the world and official FIVB competitions must be in white color. The colors of the Playground and the free zone should be different from each other. On open areas allowed slope of 5 mm per 1 m for drainage. Site lines made of solid materials are forbiden.

Lines on the Playing Field:

Width of all lines is 5 cm. Lines must be bright and different color from the floor and any other lines.

Two side and two front lines limit the playing area. Side and front lines are included in the size of the playground.

The middle line divides the playing field into two equal areas of 9x9 m, the thickness of the middle line is considered to be solid within both playgrounds. This line is drawn under the net from one side line to the middle of the other.

At each site, the line of attack is applied in 3 meters behind the middle line, defining the front part.

At each site the front zone is limited to the axis of the middle line and the edge of the line of attack.

The front zone extends beyond the side lines to the end of the free zone. 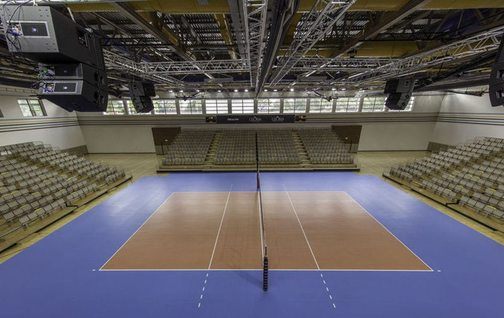 The serve zone is a 9 m wide area behind each front line.

It is bounded on the sides by two short lines of 15 cm each, drawn at a distance of 20 cm from the front line, behind it, as a continuation of the side lines. Both short lines are included in the serve zone width.

In depth, the serve zone extends to the end of the free zone.

The replacement zone is a part of the free zone, limited by the continuation of both lines of attack to the Secretary's table.

The Libero replacement zone is a part of the free zone on the side of the command ranks, which is limited by the space from the beginning of the attack line to the bottom line.

For FIVB official competitions, a size of warm-up zone is approx 3x3 meters located outside of the free zones both in the corners from the benches of teams.

Places for remote with size 1x1 is equipped with two chairs are located in the control zone for the continuation of the front line.

They can be limited with a red line with 5 cm wide.

The net is installed vertically above the midline axis and has a height of 2.43 m for men and 2.24 m for women. The net with width of 1 meter and length of 9.5 meters to 10 m consists of black cells in the form of a square with a side of 10 cm. Antenna is a flexible rod with length of 1.8 m and diameter of 10 mm. Each antenna rises above the net in 80 cm. Antennas are considered as a part of the net and limit the transition plane on the sides.

It is forbidden to play in objects that can be cause to injury or give an artificial advantage to the player.

Players can play with glasses at their own risk.

Captains are responsible for their team. Before the match, the team captain signs the Protocol and presents his team at the lot.

Each team can score points in 3 variants.

Upon successful landing of the ball on the opponent's Playground

When the opposing team makes a mistake

When the opposing team receives a Notification

Each party lasts up to 25 points, with a mandatory separation from the opposing team at least 2 points. Therefore, when the account, for example, 24:25 the party will lasts as long as the gap is not at least two points. The team included in the 3rd party is considered as the winner. With a tense game with a score of 2:2, the decisive 5th set is held, which lasts up to 15 points.. 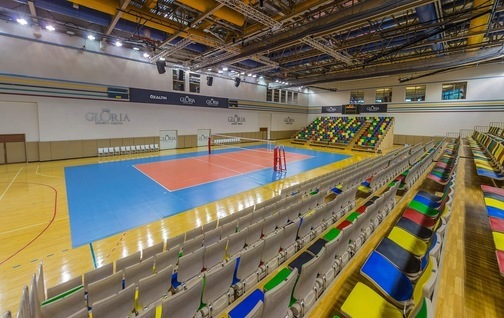 Selection of the field and Right for the first serve

The right to the first serve is played between the teams by the lot cast by the chief referee. Thus, the field and the team with the right for the first serve are determined.

Each team has 6 players.

The sequence in the transitions begins with the initial composition. It is controlled by the players ' positions until the end of each game.

The team makes the transition, all players are shifted clockwise.