What is beach volleyball and how is it play, what is its rules? 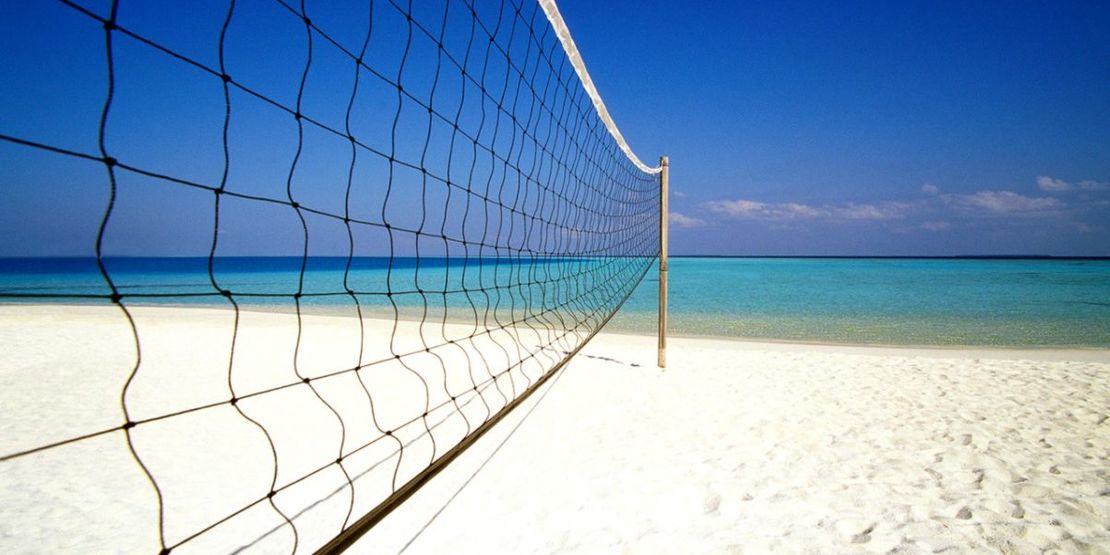 What is the Beach Volleyball? How to play? What are the rules?

Beach volleyball is one of the most successful, popular and exciting sports in the world. It is fast, fascinating and its movements require the speed.At the same time, beach volleyball consists of many interrelated and very important elements, where their excellent interaction with each other puts the beach volleyball on a special place among the rally games.

In recent years, FIVB has taken quite important steps to make this game even more popular.

This article has been prepared for the general volleyball audience, for players, coaches, referees, watchers and commentators for the following reasons:

- Knowledge of the rules of the game will improve the quality of the game. Coaches will develop even better tactics and methods of training teams that will allow players to demonstrate their abilities better. 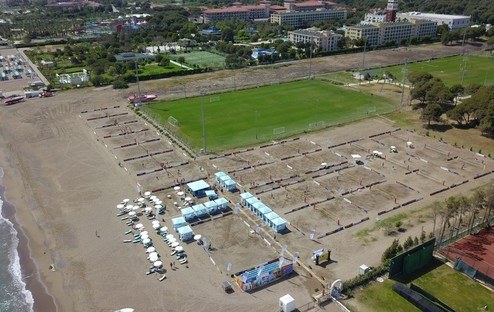 - Knowledge of the relationship between the rules will allow referees to make a better decision.

The competition allows you to demonstrate your hidden potential. It allows you to show your best side of talent and aesthetics. The rules are created to expose all of these features. With some exceptions, the beach volleyball gives all players the right to play both in front of the net (attack) and at the back of the playground (defense or serve).

The first players of this game in the California Sands recognize that after many years the beach volleyball has not lost its important elements inherent in this sport. Some of which are similar to other games where there is a net/ball/racket:

- reverse (after getting the right for service)

Beach volleyball takes an unique place among the games with a net. To this fact is affected the constant presence of the ball in the air and the transfer of passes between the players of the team before sending the ball back. The concept of rotation exists with the aim to allow all players to move. Rules about the positions of players provide flexibility to the teams and allow you to create the best tactics of the game.

These basic knowledges on technique and tactics of the game and their power the players use in the competition. They also give the players a freedom of movement to impress the watchers and fans of the game.

The image of beach volleyball is growing every day.

What should be the judges in this game?

The basis of good judging is a fair and a consistent:

- Must be neutral to all participants

- Must be neutral to the audience as well

These requirements are the most important elements of trust. The faith in the referee allows players to enjoy the game:

- Understand the correctness of the written rules

- Be a responsible organizer

- Following the rules of the game strictly, he must punish injustice or prevent rude behavior of players

- In order to make the game an exciting spectacle for the spectators of the game, he must highlight the best moments of the game and the actions of the best players to the fore.

Thus, it can be said that a good referee will use the rules to make the game competitive for both sides.

Those who have read the text before this place, the below rules can be seen as the real situation of the Big game.

Also keep in mind that a few previous paragraphs regarding this sport may have the same meaning in your case.

The playing field consists of a playground and a free zone. This field should be rectangular and symmetric.

For international and official FIVB competitions, the free zone must be at least 5 m from the front and side lines, and at least in 6 m wide. As for the free playing space, it should be at a height of 12.5 m from the playing surface.

The surface of the field should be covered with sand as smooth and uniform as possible, without stones, shells and other objects that can injure players. For official FIVB world competitions the sand should be at least 40 cm deep, smooth and soft.

The surface of the field must not present any risk of injury to players. 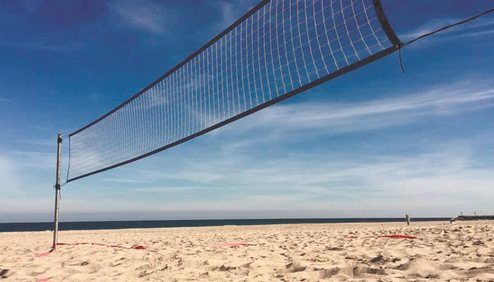 THE LINES ON THE PLAYGROUND

There is a playground, a service zone and a free zone surrounding the playing field.The service zone is an area of 8 m wide behind the bottom line, the depth of which extends to the end of the free zone.

The weather should not pose any danger to the health of the players.

For official international competitions held in the evening, the lighting of the playing field should be from 1000 to 1500 Lux when measured at a distance of 1 meter from the playing surface.

The net must be installed vertically in the middle of the court with a height of 2.43 m for men and 2.24 m for women.

Note: the height of the net can vary according to specific age groups as below:

The height of the net is measured in the center of the playground with a special pole to measure. The two ends of the net (above the side lines) must be in the same height from the playing surface, and their height can not exceed the height of more than 2 cm, according to the rules.

The net length is 8.5 m and width is 1 m (+/- 3 cm) in a tight stretched state, installed vertically along the axis above the center of the site.

Consists of cells in 10cm. There is a horizontal edging at the top and in the bottom with the width of 7-10 cm, folded in half, preferably dark blue or bright colors, stitched along the net entire length. Each end of the upper strip has a hole through which the cord is threaded, fastening the upper strip to pull the top of the net.

There is a flexible cable inside the strip and in the bottom there is a cord to attach to the poles, to pull the top and bottom. Advertising is allowed on the horizontal edges of the net.

To improve the visibility of the game arena during the world and official FIVB competitions, it is allowed to use a net and masts with 8.0 m length, consisting of smaller marked cells. These publications of materials may be issued in the FIVB rules.

Two colored ribbons with 5cm width and 1m length (the same color as the side lines of the playground) , are attached vertically to the net above each of the side lines. They are considered as a part of the net.

The antenna is a flexible rod, with a length of 1.8 m and 10 mm in diameter made of fiberglass or similar material. The antenna is attached to the outside of each side of the band. The antennas are located opposite each other, opposite to the net.Each antenna rises 80 cm above the net and is marked with contrasting stripes (preferably white and red), with 10 cm width.

Antennas are considered as a part of the net and define the lateral boundaries of the transition gap.

The poles should be at the distance of 0.70—1.00 m from each sideline of the net. The height of the poles is 2.55 m and it is desirable they to be adjustable in height.

At the world and official FIVB competitions, the poles to which the net is attached are located at a distance of 1 m from the side lines. The poles supporting the net must be rounded and smooth, the fixing of the poles to the ground using the ropes is forbidden. Dangerous and unnecessary devices are forbidden. The poles should be covered with soft protection.

The ball should be in spherical shape and made of an elastic material (leather, synthetic leather, etc.), which does not absorb the water and which can be played both in rainy weather and in all weather conditions. The ball has a chamber inside made of rubber or similar material. The possibility of using a synthetic material is determined by the FIVB Rules. 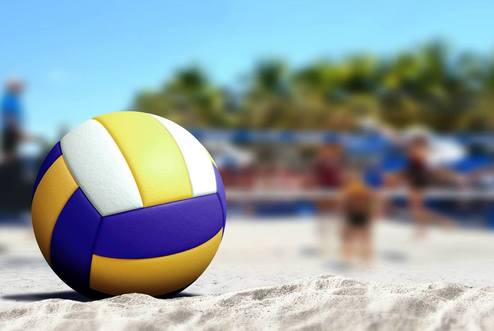 Color: one light color or combination of colors
Circumference: 66—68 cm

All balls used in one competition must have the same characteristics in terms of circumference, weight, pressure, type and color.

World and official FIVB competitions must be played with balls approved by the FIVB.

The system of three balls must be used in all the world and official competitions of FIVB. There are six collectors of balls in this situation, standing by one in each corner of the free zone and by one behind the chief refereee and his assistant.

Each team consists only of two players.

One of the players must be selected as the captain according to the protocol.

Participation and training from the outside during a match is not allowed on the world and official competitions FIVB (except for competitions of age groups and the 1st and 2nd tours of the Intercontinental Cup).

The seating area for teams (with two chairs for each) should be at a distance of 5 m from the side lines and at least 3 m from the desk.

The player's uniform is the shorts or the bathing suit. T-shirt or "top" are optional if it is not stipulated by the Rules of the Tournament. Players can cover their head with a cap or bandana.

At international and official FIVB competitions the teams must be dressed in the uniform of one style and color corresponding to the rules of the tournament. Form of players must be clean.

Players must play barefoot unless otherwise permitted by the referee.

Players ' t-shirts (or shorts if allowed to play without outerwear) must be numbered 1 and 2.

If both teams arrived on the field in the same color of t-shirts, a draw is held to determine which team will change form and the team that won will change clothes.

The chief referee may allow one or more players the following:

To play in socks and/or shoes

At the request of the player the chief referee may allow him to play in leggings, tracksuit and long sleeve t-shirt or in suitable underwear dressed under the uniform.

It is forbidden to wear and use items that can cause injury to players or give an artificial advantage to players.

Players can wear glasses or lenses at their own risk.

It is allowed to use protective, medical, soft materials to protect the existing wound.

These materials and clothing items, which players wear under t-shirt and can look out must be the same color as the team uniform during the world and official FIVB competitions.

The team captain is responsible for the behavior and discipline of the team.

a) signs Protocol of competition,

b) represents the team in the draw.

During the match, only the team captain has the right to speak to the referees in the following three cases while the ball is out of the game: Ask for an explanation of the rule applied.

If the explanation does not satisfy the captain of the team, he must immediately notify the referee that he wants to make a record of his disagreement in the Protocol of appeal. 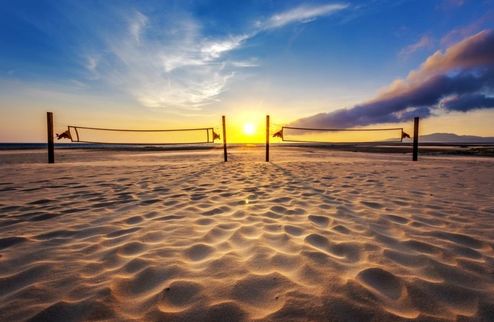 Ask for permission in the following cases:

a) to change the uniform,

b) to specify the number of the servicing player,

c) to control the net, ball and field surface,

d) to correct the lines of the court.

Ask for a break.

Note: Players must obtain the permission of the chief referee to leave the playing field.

Both players thank the referees and opponents. To confirm the game result the captain confirms the Protocol by signing it.

If previously there was expressed disagreement with the decision of the referees which was recorded in the Protocol of Appeal, he has the right to register the case in the Protocol at the end of the match.