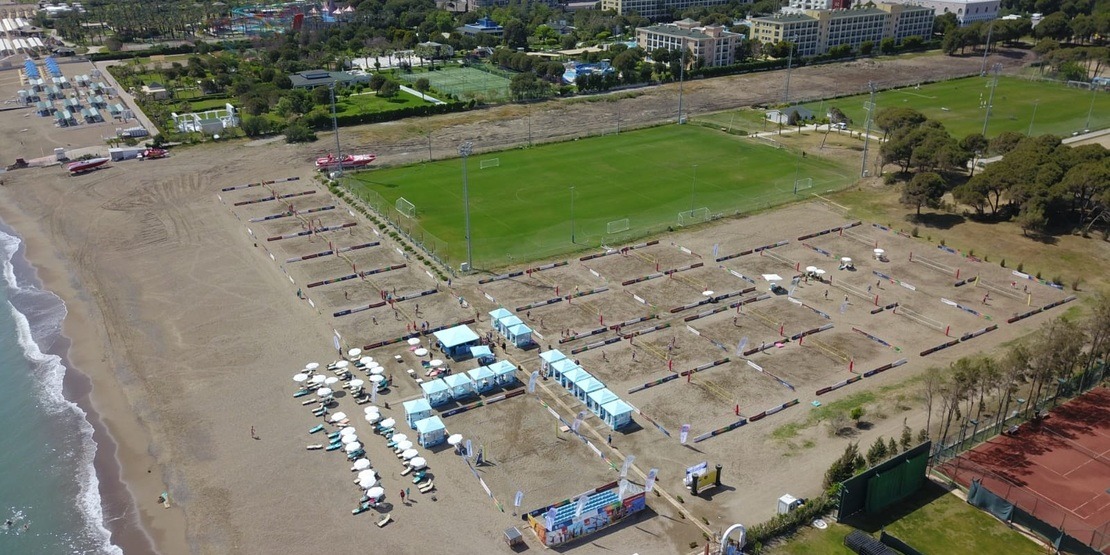 Beach soccer (football) originated many years ago on the beaches of Brazil, Rio de Janeiro, as a result of barefoot children's football game .The idea of creating the first world official beach soccer League was adopted in 1992, and as one of the reasons was the technical superiority of Brazilian players. The first international organization was established in 1993 in Miami

(USA). Brazil won the first championship. In addition to being an excellent summer entertainment, beach football, which is played on the sand and barefoot, has the advantages of air conditioning, is a very important source of players on the green fields.

One of the factors that make Brazil successful in world football is that its substructure is based on beach soccer. 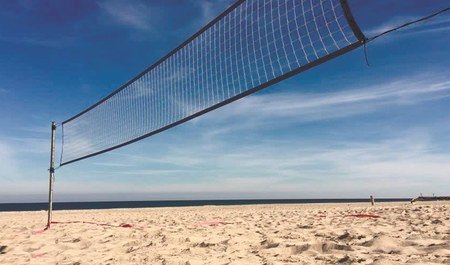 The first steps of beach football in our country were laid in the period from 2000 to 2005, when our team under the national decree joined several Championships in Brazil and Europe.

In 2006, the Football Federation Of Turkey registered beach football FIFA got its beach football. Since 2006, TFF has been organizing a beach Soccer League. Thanks to the advantages of the geographical structure of our country, beach football continues to spread throughout the country.

Our beach Soccer Team has also been participating in official matches and international tournaments since 2007. Our team is among the elite teams in the 2010-2011 season in the international arena. Our goal is to spread beach football among children and teenagers across the country. The geographical conditions of our country, which are very suitable for the development of beach football, are an important opportunity at this point.

Changes can be applied by changing the relevant rules, subject to the principles of the member federations in the competition of players under the age of 16 years, women players, veterans (over 35 years) and players with disabilities. Changes can be changed in the following:

The ground surface of the field should be flat and sandy, and the sand should not contain pebbles, shells and other foreign substances that can lead to injury to players. In international competitions, the sand should be thin and at least 40 cm deep. The sand must be sifted until, until he will meet the standards of the competition, and it should be free from pebbles or other objects that may be dangerous. But the sand doesn't have to be too thin and don’t produce dust, sticking to the skin. The field form should be rectangular. 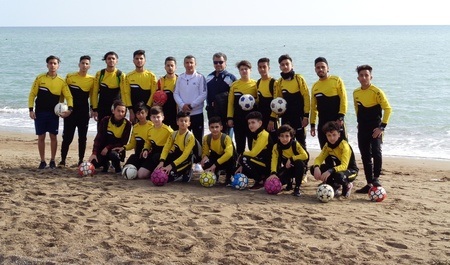 The length of the sidelines should be greater than the gate line. Length: 35 – 37 meters, width: 26 – 28 meters field marking, field boundaries are defined by lines, and these lines are included in the area they limit. Two side lines that are long are called side lines. Two shorter side lines are called goal lines. All lines should be dedicated with a blue stripe, which is 8 to 10 cm wide and contrasts with the sand. The tape should be flexible and durable, do not interfere with the feet of the players.

These tapes should also be secured to the gate with special clips at all corners and in the center of the two sidelines, as well as rubber bracelets attached to the gate posts. The field is divided into two equal parts by an imaginary line, and the Central line is indicated by two red flags planted outside the field. The middle of this imaginary midline is where the initial kick and some certain free kicks come from.

Flags are exhibited at every corner, non-pointed, flexible, durable and waterproof red plastic flags are attached to the ends of flagpole. One yellow flag and one red flag are displayed on both sides of the center line, where the imaginary lines that define the penalty area end. All these flags should be securely fastened outside the side lines from 1 to 1.5 meters.

Flagpoles should be at least 1.5 meters in height. Area replacement of the player - this is the place where players get on the field and out of field on the sideline. The player substitute area is in front of the referee table and should be a total of 5 meters, 2.5 meters on either side of the point where the side line and the center line are connected. Team benches should be placed behind the side line so as not to block the space for player replacement. The gate should be placed in the center of each gate line.

The gate planks consist of two vertical pillars at equal distance from the corners and a horizontal pole connecting them from the upper points. The distance between the two pillars (inside) shall be 5.5 metres and the height of the floor to the top bar shall be 2.2 metres. Vertical posts and horizontal posts have the same thickness and must be at least 10 and not more than 20 cm and painted in a color that contrasts with the sand. The nets on the gate should be made of hemp, jute or nylon and attached to the back of the horizontal post by vertical posts.

For safety reasons, the Foundation of the pillars should be under the sand. Two horizontal poles, 1.5 metres long, attached to each anchorage, are connected by a hook or knot to a plastic rod or chain on the back side and placed on the ground. This rod (or chain) must also be fixed to the sand. Around the security field should be decomposition with a width of 1 to 2 meters. Gates can be portable, but must be carefully enshrined on earth during competition.

What are the dimensions of the field ? 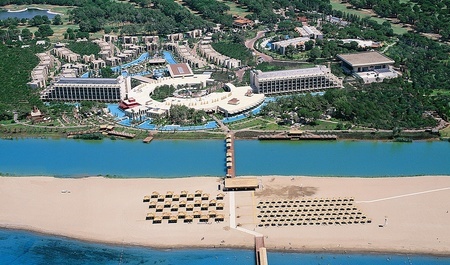 Beach football is played on a rectangular field ranging in size from 35 to 37 meters, width from 26 to 28 meters.

The lines of the boundaries of the playing field are marked by strips of blue color, the thickness of which is not less than 8 centimeters not more than 10 centimeters.

4 yellow flags are located right next to the goal lines, at a distance of 9 meters.

Where is the penalty spot in beach soccer?

The area between the two flags and the goal line is called the penalty area. The penalty point is right in the middle of this imaginary line.

What parameters should have a beach soccer ball?

The diameter of a specially made beach soccer ball is 70 centimeters, and the weight ranges from 400-440 grams. The ball must be round, the ball must be of leather or other suitable waterproof and wear-resistant material.

How many people are on the team?

Teams fight with 5 players in total, including the goalkeeper.

The game begins in the center of the field at the sign of the judge. Players try to break through the opponent to his gate, without using the hands and hands.

During the game there is one right for one return pass to the goalkeeper. If the ball is dealt back a second time without touching the opponent, the opposing team is entitled to a direct hit right from the middle of the field.

How are red and yellow cards given?

In violation of the rules of beach football there is also a yellow and red card practice, as in classic football. The player who sees the yellow card leaves the game within two minutes and the team remains four. The player who gets the red card leaves the game, the team of the punished player fights 4 people on the field for 2 minutes. At the end of 2 minutes, the offending player may be replaced.

How long does one game last and how many periods?

Beach soccer match is played in 12 minute periods of 3 periods. The team that wins the most points becomes the winner of the match. In case of a draw, an additional 3 minutes are given. If the draw is also maintained, a penalty is given.

We briefly told you about beach football, as it is one of the most popular summer sports. 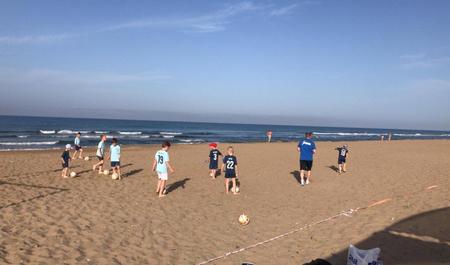 Teams fight with 5 players on the field, including the goalkeeper. The right to substitute a player is unlimited. Players must fight barefoot, they can use knee pads. Each team consists of 10 players in total, including reserve players.

In a beach soccer match, 4 judges perform their task. While two of them run the game, the third referee is in charge of the reserve. The fourth judge is the judge of time. There are yellow and red cards, as in the same football. The player who sees the red card leaves the game, the team of the punished player fights with 4 people on the field for two minutes, at the end of two minutes the player who was punished can be replaced.

If for any reason one of the teams remains on the field with less than 3 players, the rival team wins. There is no offside rule. The goalkeeper starts the game with his hand. Blows with the side lines are run by foot or hand.Период

Beach football match takes only 36 minutes for three periods of 12 minutes. The match ended in a draw, gets a 3-minute extra time. If the draw is not broken in extra time, a penalty is given